Popular Pakistani singer Falak Shabir and his wife, Sarah Khan have recently welcomed their first child, a daughter on Friday whom they named, ‘Alyana Falak’.

The update was shared by the singer on his social media handle with his fans and followers. Sharing a super-adorable photograph of the new baby girl, he introduced his daughter with the world and expressed his happiness over the same. The caption of the post reads, “Rabi-Ul-Awal Mubarak….Jummah Mubarak…..ALLAH pak ne is ba barkat maheenay ke ba barakat din Apni rahmat se nawaza hay…..Shukar ALHAMDULILLAH ………So happy to announce the arrival of my daughter who is half me and half the one I love. Introducing ALYANA FALAK (family emoji)…..App sab ke pyar or dua ka shukria” Also Read : Lyricist Ravi Raj Brings Home A Brand New Audi On His Birthday!

Not only this, Falak shared a series of video on his Instagram story where he can be seen reciting ‘Aazaan’ for his little kiddo. 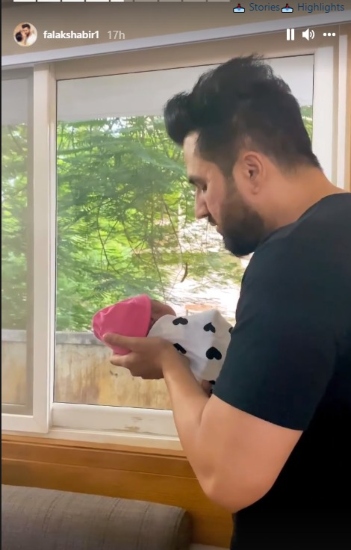 Let us tell you, Sarah is a Pakistani actress. The couple had tied a knot last year in 2020 and had announced the pregnancy earlier this year in June.

Falak is known for giving some really soulful songs including Ijazat, Rabba Ho, Sohniye and others which have made everyone hooked to his voice. Also Read: Karan Johar Refuses To Make Yuvraj Singh’s Biopic! But Why?

Well, Team GhaintPunjab also congratulate the new parents for this new beginning and wish them the best of times ahead.