As they say hardwork always bear fruit and one such example is being set by a 19-year old lad from Chaudhariwala village (Naushehra Pannuan) in Tarn Taran district named Adesh Parkash Singh Pannu who has been appointed as a Flying Officer in the Indian Air Force. 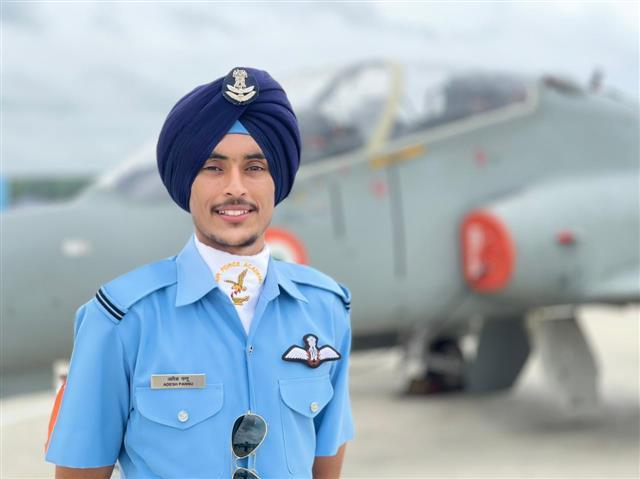 He got his primary education from a private school in the village who is also a student of NDA preparatory academy Nishan-e-Sikhi, Khadoor Sahib, Tarn Taran who belongs to a marginal farming family. Reportedly, his father Amarbeer Singh Pannu serves in the SGPC and mother is a teacher in a government school. His father filled with pride on his son’s huge success said, “My son is quite mature and had the zeal to serve the nation at a very young age. I have been proud of him and will always be.”

Colonel Kulbir Singh Puri, a retired group officer of the academy, talking about Adesh told, apart from clearing his Class XII, he was trained at Nishan-e-Sikhi Institute of Science and Training (NDA preparatory wing). Adesh was commissioned as a Flying Officer in the Indian Air Force during the combined graduation parade held at the Air Force Academy, Dundigal, on June 19. Also Read : Kuwar Amritbir Singh: The Only Sikh World Record Holder Of 35 Superman Push Ups In 30 Seconds!!

The 19 year-old cleared the NDA exam in March 2017 for the Air Force and joined the National Defence Academy, Khadakwasla, Pune, in May 2017 as course batch 138. The passing-out parade was held on May 30, 2020, after the completion of the three-year training.

He joined the Indian Air Force Academy, Dundigal, Hyderabad, Telangana, in June 2020, for further training, where he was appointed as a Flying Officer. Nishan-e-Sikhi, Khadoor Sahib which is being run under International Environmentalist Baba Sewa Singh, head of the Kar Sewa sect. Also Read : Singapore PM Wears Turban At The Gurudwara Inauguration Ceremony, Greets Sikh Community With 'Sat Shri Akal'

Needless to say, the lad has made everyone proud. Therefore, Punjab Chief Minister also took to his social media handle to congratulate him. He wrote, "Heartiest congratulations to Adesh Prakash Singh Pannu for being commissioned as a Flying Officer in the @IAF_MCC. He comes from a humble farming family of Tarn Taran & was a student of NDA preparatory academy Nishan-e-Sikhi. My best wishes are with him. "