Ayanna Williams, who broke the Guinness World Record for the world's longest fingernails in 2017 has finally had them cut after nearly three decades. At the time, her fingernails measured nearly 19 feet long. It used to take more than two bottles of nail polish and over two hours to complete a manicure. 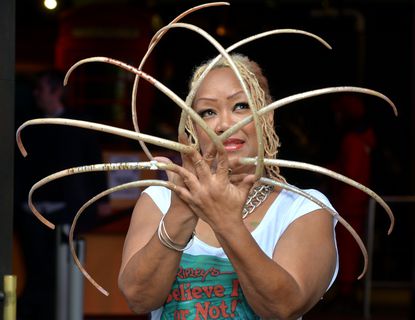 Williams got her nails cut this weekend. Her nails were cut by Dr Allison Readinger of Trinity Vista Dermatology in Forth Worth, Texas, USA, who used an electric rotary tool for the work. It was the first time in 30 years that Williams had cut her nails and it was an emotional moment for her. Guinness World Records shared the video of the memorable moment on their official instagram account.

At the time of being cut, they measured a whopping 24 feet and 0.7 inches. She said she had been growing her fingernails since the early 1990s. "With or without my nails, I will still be the queen," Williams was quoted as saying by the Guinness World Records. "My nails don't make me, I make my nails," she added. Also Read: Kim Kardashian Joins The Billionaire's Club , Marking Her Debut In Forbes

Williams spent 28 years growing her nails. However, she faced difficulties in carrying out day-to-day tasks. Activities like washing the dishes or changing bedsheets became tougher as her nails grew longer. "With my movements I have to be very, very careful. So usually in my mind I'm already preparing for the next step that I have to do to make sure that I don't hurt myself with my nails - or break them," she said. "I'm excited about cutting my nails because I'm looking forward to new beginnings."

i faced the charges for the things i didnt do elly...