Former judge of the Supreme Court, Justice Surinder Singh Nijjar passed away today morning at the age of 71. Reportedly he suffered a major cardiac arrest.
The former Acting Chief Justice of the Punjab and Haryana High Court was also the former Chief Justice of Calcutta High Court. He had also served as the judge of the Supreme Court from November 17, 2009 to June 6, 2014. 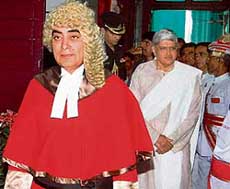 Surinder was born on June 7,1949. He is a known name in the field of arbitration law, having delivered many landmark judgments like BALCO, Enercon India v. Enercon Gmbh, Reliance Industries Ltd & Ors. v. Union of India, Swiss Timing Ltd. v. Organising Committee, Commonwealth Games, 2010. He obtained his bachelor’s degree in Law from the University of London in the year 1972. Also Read: Shivangi Joshi Marks Her Debut In The Punjabi Industry - More Details Inside