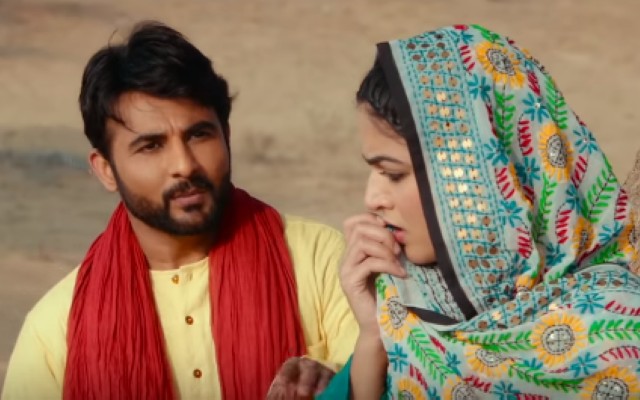 Synopsis: The film revolves around a guy who is a self-acclaimed wrestler who falls in love with a girl from another village. His love life takes over and he plans to give up his wrestling dream but then a startling fact makes him realize how important his wrestling career is for his family, especially his grandfather. His match also is the deciding factor for both his love and his family pride.

Review: When the trailer of the movie was released, we thought that we'd see a glimpse of Dangal in it. That's the least we expected but Nadhoo Khan, the title itself made an impression on our mind that the film, if not inspired from Dangal, would atleast have the story of a wrestler and a social message which would inspire the younger generation to adopt this sport professionally and ethically.

But sadly, the film had neither the slightest proximity to Dangal nor did it do anything for the sport. Rather, throughout the entire feature, the sport, I believe was only having a merely 15-20 minutes of reference.

The film starts with a fart noise and one cringes as to why did the makers think that was funny. This is followed by a brief touch upon the characters and the set up through some music when the kids are running around the entire village unnecessarily. Then comes the introduction of Harish Verma in the most unimpressive way which pops to reality as it was a dream and he is shown to be a self-acclaimed wrestler who has never been trained but boasts of being one.

When challenged for a fight, the man always chooses to walk away.

Then comes a wedding sequence which is overly stretched with some zabardasti de comic elements that introduce you to the colorism aspect of people. The groom is finally given an unexpected bride and he goes home crying just because she is 'dark' in colour and later also, he is heard telling her to go poop but not show her face to anyone!

Aslo, while the baraat is leaving, there is an unexpected introduction of a fake gora who comes riding on a horse to speak some fizool dialogue baazi which left us wondering why it was such an important scene for the film and why take a fake man as gora when you have availability of so many foreign actors nowadays.

Chalo hone budget issues but how about the lead actors. How come the director didn't work on them? The lead pair, Harish Verma and Wamiqa Gabbi were unconvincing in their roles. Where, at one point, Wamiqa is seen trembling that someone might react to the men looking at them, there, on the other hand, the girl is seen dancing openly with the man in the wedding function and the man even has the gutts to hold her hand amidst the entire wedding crowd and the girl, surprisingly falls on the floor and is later shown to have a fever...all this because he touched her?? Well.. can't say because again, the sequence got lost in a bad screenplay.

Then came the stance when Harish Verma plans to give up on his sport for his lady love but when he tells his grandfather about it, there comes a looooooooong monologue by BN Sharma, which is so stretched and unbelievable that the film, falls flat there so badly, it never stands back. Firstly, the monologue is wrongly placed in the film, probably this could have saved the film if it would have opened with this storyline because atleast then the audience would have known where the film is heading towards. Secondly, it is simply stupid of a person to not know about the achievements of his grandfather even though the man left his passion due to his family circumstances. Dude, eh pind haige oh vi Punjab de, ethe ta loka nu pta ni kehde kehde pushta baare  sab pta hunda eh ta fer vi jionda jaagda bnda si that too his grandfather. Pind waleyan ne kde ni dseya ehnu ke tere dadaji kinne vdhiya wrestler si?? DUH!

So after this heavy on brain sequence comes another meeting of the man and his lady, on a spot where they repeatedly meet as if company bagh hunda jado ki saara pind othe poop krn aunda hunda, according to the film and even the girl's mother, Gurpreet Bhangu, a senior respectable actor has been given a dialogue, chalo main vi aundi aa swere theek ai ni si hun kr aundi aa khul ke, type kuj ta ghatiya jahi line si that made me wonder what the hell man..ah ki kuhaya hoya ehna bechareya to.

So, here again.. I'd say that there has been a lot of poop talk in the film.

Han, so the man meets his lady and he says I'm not going to marry you and suddenly then, her Dadaji comes there to hit the man and soon confronts Harish wale Dadaji to finally recognise him as the man whom he had challenged ages ago for a fight, left unfought. The man is thrown this challenge again but this time for Harish opposite Wamiqa's brother, who is a professional wrestler winning the matches since the last four years.

In the next few sequences a petite Harish is shown training for the match which will decide the fate of his family's pride and his love life, and wollah, the man wins without you even knowing. Later, after the winning moment, the director decides to play the sequence as a smart show but fails.

Amidst this fight comes a naare baazi scene which is equally funny and too much to handle. When Harish is thrown unconscious on the ground during the match, Harinder Bhullar (who started as a turbanned character and was later shown as a Muslim, the great-grandson of Nadhoo Khan, who lives in his patent village as a dholi because his grandfather asked him to...and blah blah whatever) is seen shouting religious slogans, followed by a panditji and then the Bole so Nihal, which go on and on for a seemingly never-ending time. Abeh what is this yaar! The director might have felt that this will fill the audience with josh to see their hero win the match and they'll clap in the theatre but on the contrary, people were abusing the film saying kya F*&%u kam hai eh yaar. (actual words from the viewers watching the film)

Also Read: Muklawa Trailer Review : Relive The Time When Seeing One's Own Wife Was A Crime!

None of the actors did anything for their films, starting from Harish Verma to Wamiqa Gabbi to the veterans. Rather, Hobby Dhaliwal's make up was bad and he did not justify as the father of BN Sharma at any point in the film. The only three characters who were still better than the rest were BN Sharma, Baninder Bunny and the girl who plays Wamiqa's friend (Kaato). These three actors did a fair job and could be given the credit for making us smile atleast once or twice in the film.

The story and screenplay of the film are unconvincing, unbelievable and amateur.

The dialogues were written to sound too smart but none of them made a lasting impression. Rather the era that they've shown in the film did not have people speaking such urban Punjabi. The dubbing should have been taken care of especially for a film depicting early rural Punjab.

The songs are average and did nothing for me as a music lover.

Verdict: Nadhoo Khan is a film that left us totally disappointed and we wondered how people come up with such ideas! It does nothing for the sport and speaks nothing of the mighty achievements of any wrestler named Nadhoo Khan. A disaster made with a team that presumably had no clue where they're heading.

(Disclaimer: This review is entirely a personal opinion after watching the film. You could like the film but our opinion is based on our liking towards this particular project.)