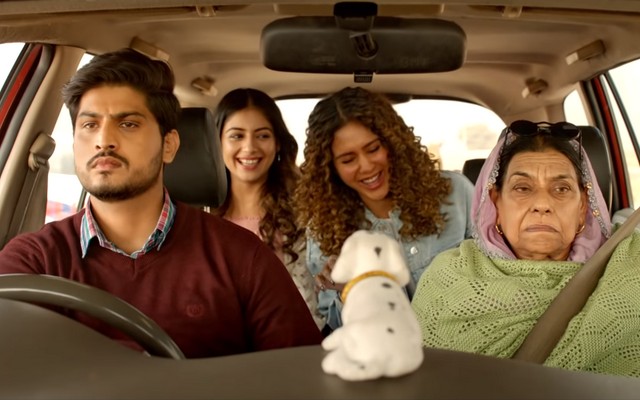 Synopsis: Guddiyan Patole is the film about two sisters and their grandmother. The girls are sent to Punjab by their mother for a family function and that confronts them with their maternal family where at first the relations are superficial but then things change for good. There is also a romantic angle to this story.

Review: Guddiyan Patole is a light-hearted film that had the capacity to make our eyes wet at some places while overall it played in front of us like a cool breeze. Sonam Bajwa and Tania play sisters who live separately as their parents are divorced. This is basically the pivot of the entire film, their parents' marriage, and the divorce. The mother (Manjeet) elopes with a foreigner to get married to him against the consent of her mother. The unhappy mother (Nirmal Rishi) promises herself to never look back at Manjeet for bringing a bad name to the family. Here, the complication is subtly shown by the makers because Manjeet is aware of her mother's anger and the fact that she and her husband have parted ways, is also one of the reasons why she requests her daughter (Tania) to got to Punjab to attend a family function. Tania then convinces her sister (Sonam Bajwa) to tag along and the duo ultimately lands in Punjab to get received by a taxi owner/driver (Gurnaam Bhullar) who, till the end of the film, is with them.

Sonam is shown as a tomboyish female who just doesn't give a damn to the world. Though her looks in the film are drool worthy but at some points, her extrovert avatar seems to be a little too much to handle, especially during the birthday celebrations. On the contrary, Tania looks too young and introvert in the film, which was also not going in her favour. We agree that the director must have thought of showing a contrast in the character of both these actresses but somewhere both the ends were a little over the top.

The subtle flow of the film's storyline was appealing but there were also abrupt jumps at some places that made the watch ride bumpy. Gurnaam Bhullar's character in the film would definitely raise hopes in all the cabbies receiving international clients because who knows, someone might fall for them too. His last tryst with the camera was a complete turn-off but this film has him as the sweet and innocent guy who aspires to settle abroad and keeps talking to a nodding toy dog in his car. This young artist could make it big if he sticks to playing the innocent characters and doesn't go too over the board in search of experimental characters.

The family drama in the film was relatable and one could easily connect with the sequence of events. The segment where the girls take their grandmother out for leisure time is also a good try by the makers to show all the girl fun and affection that kids share with their grandparents. How the girls change their grandmother's social standing is also a positive of this film.

Talking about the direction by Vijay Kumar Arora, we feared that the man might get distracted as the film is a female oriented subject. To make it more audience-friendly, at times, the directors add a lot of elements to the film but Vijay hasn't done so. He has left the real essence of this film intact. This has worked in his favour. It was a relief to not see the same popular faces as the character actors, rather some new talent was given a chance and they did their parts pretty well.

Music: An average album, this one has songs that aren't too hummable. Only the title track has a catchy beat. I especially didn't like the song that was played in the club when Sonam was dancing with her seductive moves on beats that did not do justice with what she was doing.

Verdict: Though the title of the film was a complete mismatch but the film on a whole is a watchable one. It is not the typical rural family film, people are shown with a very progressive mindset so it is also good for the urban audiences.