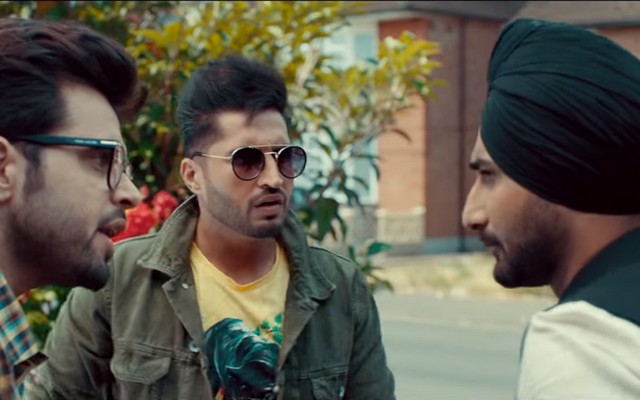 Synopsis: High End Yaariyaan is a story of 3 friends Ranjit Bawa, Jassi Gill, and Ninja who live abroad. The story of High End Yaariyan revolves around their respective love lives and also their personal problems. How each one of them fights the odds is what this movie showcases.

Review: In the era when a major chunk of Punjabi movies is about rural stories, High End Yaariyan was a film that, we expected, would emerge as a breather but alas! our expectations were totally shattered after watching the full presentation. This so-called-tale-of-3-friends was basically a story of 3 individuals and their love lives. Each one of them is shown entangled in his own mesh of romance. Jassie Gill - the Casanova, Ranjit Bawa - the desi guy and Ninja - nerdy looking 'bahman' are the three friends who stay together at Jassie Gill's home in the UK. While Jassie is seen as the rich guy with a hollow life, Bawa is a simple guy from Punjab who is in the UK to search for his lost love and Ninja is the guy who is only there for his girlfriend's overseas dream. Where each of the characters is placed appropriately, there itself the expectation level from them rises, and that's where the film falls flat. None of the characters has a proper build up for their stories to get a convincing feel. On top of it, the bad choice of female cast has made the film even more disappointing. Each actress has been given the most inappropriate introduction. Where Aarushi suddenly barges in with an irritated expression that's way too overdone, Muskan is seen popping out of her car's window just to praise a guy on a luna and even take a selfie with him for no good reason. Then comes Navneet Kaur Dhillon who literally drops out all her assets during her introduction scene and even the camera work where her skimpy clothing is shown makes you cringe because the actress doesn't really look too toned to show off her curves in that close frame. We wonder how suddenly the guys make out that kudi ta changi aa, when all that they've seen till then is her body. About the girl who played Ninja's Chandigarh wali girlfriend, she was really an offense to the true Chandigarhians, frankly to me also, being a hardcore Chandigarh girl. Her slang and her persona onscreen weren't the best to have her even onboard as an actress. Talking about the acts of the male lead actors, Jassie and Ninja were average performers while Ranjit Bawa managed to steal the show with his perfectly timed comic punches. He was the only one who looked and felt convincing as his desi self.

The romances of all these 3 men were blank and lacked soul. None of the stories really stirred any emotions. The story was so off the track that at some points one feels 'yaani kuch vi hoi jaa reha haina'. On top of it the Gurnaam Bhullar tadka to this film spoilt it further. Shown as a billionaire, Gurnaam fails as an actor and Pankaj Batra fails to add substantial richness to his character that is shown to be featured on the cover of a magazine. Ultimately you see him getting married in a sasti jahi wedding venue to a girl who is wearing the most non designer wedding outfit possible for a billionaire son. The same is the problem with Jassie Gill's character. Merely showing 2 people with grey hair as his parents doesn't really show how rich they are. One needs to be shown much more in-depth life and emotions to make one feel sorry for the hollow life that each of them is living.

Be it the shoot in UK or that in Punjab, each frame shows that the team took this film for granted.

Talking about the storyline and direction, both these aspects of the film were very weak. The story lacks conviction and the direction lacks vision. Being a Pankaj Batra film, I was personally looking forward to some great cinematography but this one wasn't really his most flaunt-worthy work.

Music: The film has a mix of genres but overall it is an average album.

Verdict: This tale of friendship totally lacks the soul for the audience to feel anything for any of the characters that are there on the big screen. You are left numb, emotionless and bored, wondering whether the makers were holidaying while making this film or was this film made during one of their leisurely holidays. This one is taken totally for granted.

Rating: 2/5 (They've got an extra star just cs of Bawa else the film stood at 1)