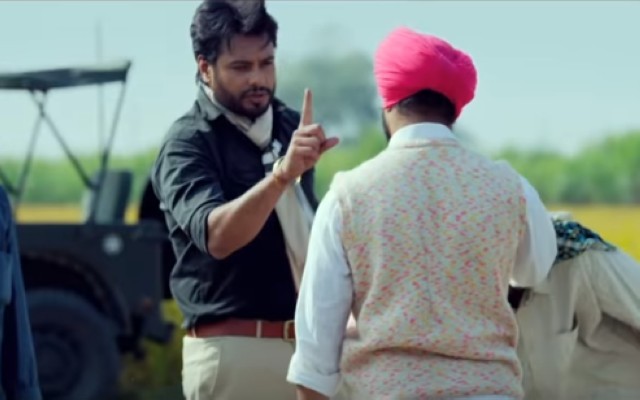 Synopsis: The story of Kaka Ji highlights the era of the 90s in Punjab when the notorious gang Kale Kachia Wale was dominant in the state. Kaka Ji falls in love with Deepi, a young girl from the adjacent village. Things take a turn and Deepi gets engaged to someone else, leaving Kakaji with some unanswered questions. How he gets his answers and what follows is what Kakaji the film is all about.

Review: Kakaji starts off with the title song playing in the background and Dev Kharoud's character getting introduced to the audience. It starts from here...one can easily make out that the director is pretty confused about the shades of this character. In an attempt to show the flamboyance of this Casanova, the director adds as much as he could but it all falls flat, atleast for an understanding of the character called Kakaji. The first half of the film shows faltu de ldai jhagde, fokki dialogue baazi and some dreary action sequences and in the second half out of the blue a girl (Deepi) comes in to serve milk to a guy sitting along with drunkards and suddenly the two pop up into a dance sequence. Right after the song, this flirtatious Kakaji suddenly realises that he is in love and this time the true types. Chalo ji after some college romance scenes and gaana bjana the girl says that she has 2 months vacations from her college and she won't be able to meet Kakaji. Disappointed, Kakaji plans to go to Deepi's house and throughout, it is the Kaale Kachia Wale gang that has the pind wale on their toes, which becomes the reason why Kakaji is unable to meet Deepi. Amidst this boring and monotonous attempt of mel milaap, there is a sudden jhatka to Kakaji when Deepi gets engaged to a wrongly caught red handed lover of some other girl. Now the point here is that was the girl dumb to not go out and see the man about whom she's being questioned?? Or she'll nod for any abc person caught red handed when her mother says Deepi eh bahr jo munda aya teri galbaa aa ohde naal! Lol oh munda koi vi ho skda si..atleast kudi nu dikha ta do ke jnaab jo fde gaye ne oh hai kaun!

Chalo, one more question...Kakaji was introduced with a gun in his hand and he was so comfortable with it that he was blindly firing air shots while enjoying a film sequence. Hmmm...where was the gun when he was fighting so many people at different points in the film?? Was the gun only for air shots during film screenings??

Let's also talk about the love story now. Both Kakaji and Deepi's family had a phone line installed at their home. So, if Kakaji can make Rekard change his voice to call Deepi on the phone, can't Deepi give a missed call or a literal call to her 'main tere bina mar jungi Kake' wala lover to tell him exactly what was the scenario which got her entrapped? All the while when Kakaji was shown in a Devdas avatar, was Deepi dreaming about her vyah de designer suit??

For those who know about this gang of robbers, Kaale Kachian Wale never wore black full outfits. They used to wrap a black cloth on their pelvic area as a dhoti tightly tied in the form of an underpant and used to grease their entire body before attempting a robbery. Ethe te Kaale tracksuita wale si chor!

The film ends with a thud and you're not just disappointed but even sorry that a team which has delivered one of the most powerful products last year, is behind this piece of crap called Kakaji.

Direction: Director Mandeep Benipal has majorly lost focus while helming Kakaji. Either he took Dev Kharoud's fame for granted in the sense ke kuch vi bnalo chal jega, or he sincerely didn't know how to attempt this genre. One could literally see the crowd interacting with the behind the scene staff in the film (the woman in the bus), people squeezing through doors just to pose as Kakaji's gang men and more such silly directorial liberties. Even the resolution and quality of shots kept fluctuating. For me, Mandeep is the Director who can deliver realistic cinema and that's what he should focus on..not this atleast.

Actors: Dev Kharoud is one actor who has emerged as the face of parallel cinema in Punjab. He is the man who is now being trusted by the audiences for delivering content based and realistic cinema experience but if he continues opting to work in films like Jindari, Yaar Belly and Kakaji, the time would soon come when the audience would not be interested in watching his films. As Kakaji, Dev Kharoud was a disappointment and I am certainly not pleased watching an actor like him perform so badly. His action, body language and everything indeed sent across vibes that the man has suddenly become a little too overconfident, which certainly needs to be tamed.

Debutante Aarushi Sharma was atleast better than many others who are stone faced and she also looked like a promising talent but she's certainly not for films of rural backdrop. The girl has glamour on her face and she just didn't fit into her character of a desi Punjabi pinda di kudi.

Jagjeet Sandhu, for me, came across as the only man for whom I sat through the film. He saved the film as much as he could but ultimately the unskilled baking burnt the cake.

Ashish Duggal was not given enough screen time to justify his character of a high headed Sardaar. Rather, throughout one just keeps wondering what his riches are...only talks??

Every character in the movie is actually treated the same way. Just planted out of nowhere and left unattended.

Music - Except for the title track and the party number, there's not much that this film could offer.

Costumes - The costume designer of this film needs to really upgrade his or her fashion sense because not only were the clothes shabby, they seemed to have been purchased from a local flee market!

Verdict: This Kakaji was a major disappointment!

Rating:1/5 (a one only because of Rekard)