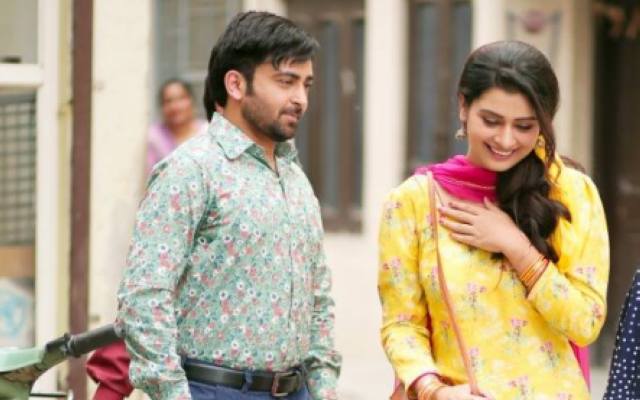 Storyline: Marriage Palace is the story of a man who falls in love with a girl and on the day of their wedding, the confusion leads to swapping of brides. What follows is a 1 hour 42 minutes of comedy intertwined with a masseur father and his UP wala subordinate, a buaji who doesn't go back home, a tape recording shop owner (who happens to be the bride's father), a man who does nothing for a living (the masseur's son and the lead hero), his friend (who is the son of the masseur's love interest) and the tape recording shop owner's daughter (the lead actress). Other characters were also there but these were the prime ones.

Review: The film starts with a song that's a poorly choreographed adaptation of Carry On Jatta 2's title track. That's the first impression of the movie which crashes one's expectations. Then starts the story. The first character to be introduced to the audience is a masseur played by Jaswinder Bhalla, who has a favorite phrase 'Ta ra ra krke' (which is why he's also referred as sasta Daler Mehndi). His son (Sharry Maan) and his friend (Sumit Gulati) do nothing for a living. Sharry falls in love with a girl (Payal Rajput) and proposes to her through romantic songs taped in cassettes. The audio recording shop owner happens to be the father of the girl whom Sharry loves (he's unaware of the budding romance) who also offers some free advice to this love for wooing his lady love. Sharry's friend is the son of a PCO owner who is a single mother (her husband left for somewhere but never returned) who is the love interest of Jaswinder Bhalla. So the story moves forward and the wedding talks come forth. The groom's father insists that the wedding should be arranged at a marriage palace. It is here that the confusion happens and two weddings happen at the same palace, leading to the accidental swapping of brides. The other groom is played by Harby Sangha, who has his guardian as Nirmal Rishi and his bride is played by Nisha Bano.

Let's talk about the actors now.

Sharry Maan: If you have watched his earlier 'unbearable' performances then this one is surely a watchable act. the man has improved in terms of acting and dialogue delivery but still has a long way to go before we can call him an actor. His dubbing was on the point which saved his character in the film but he definitely didn't look like a 25-year-old.

Payal Rajput: Payal plays the character of a strong headed girl who falls in love with Sharry's character and ultimately falls prey to the confusion of swapping. Her role was average but she performed it well, though at times there were little overdone expressions.

Sumit Gulati: The comic act by this pro is worth every frame. His ease of characterization makes his onscreen self a pleasure to watch. He keeps one on a giggly mode throughout.

Jaswinder Bhalla, Anita Devgn, BN Sharma, Rupinder Rupi, Harby Sangha, Nisha Bano, and others are smartly planted in the film and they do hold a high stake in making this film a complete entertainer. Though I wasn't really happy with the under-use of Nirmal Rishi's potential.

The soundtracks were a mix of peppy and romantic numbers.

Directed Sunil Thakur offered nothing exceptional in terms of technicalities. The shots seemed repetitive and were of the seen-before-in-other-films type buy yes, the film was edited well keeping intact a connect all through.

Verdict: Marriage Palace is a breezy comedy that has no double meaning punches, which makes it a family film. For an easy viewing, this one is a watchable presentation.