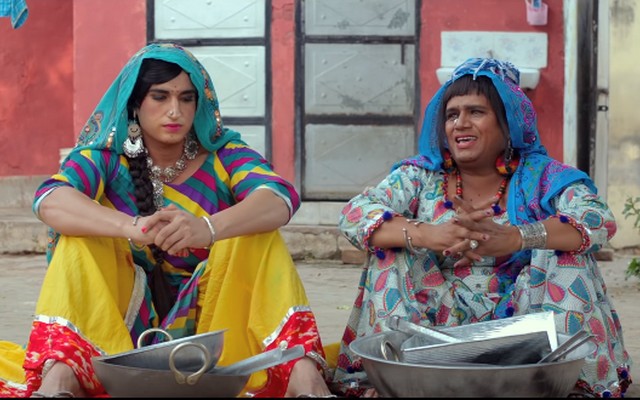 Storyline: This time, the story revolves around a family which has a member who is addicted to drugs. In order to get custody of his chunk of ancestral land, his Chachi suggests that he should be married off but no sane parent comes forward to get their daughter married to an addict. He gets introduced to two men (Jassie Gill and Karamjit Anmol) who run a marriage bureau and that's when they plan a plot together that takes the audiences on a crazy laughter ride.

The film opens with a family based in rural Punjab which includes 2 elderly men, a bebe, a chachi (Anita Devgan), big brother (Jaswinder Bhalla) with no wife but a mindless son (Naresh Kathooria), another brother (Gurpreet Ghuggi) with a hot tempered wife and a son; and the youngest one (Ranjit Bawa), a drug addict. The family owns 30 kille ancestral land but the elder two brothers disagree over the fact that the 10 kilas that are to be registered on the youngest one's name should be given to him because he might just sell everything off to buy drugs. This is the first half of the film and it is the funniest. The way things are made up throughout the first half, makes your tummy muscles twitch because of laughing so hard. I still giggle when I think about Anita Devgan's scene when she gets high (tooooo funny)

The second half is about getting Ranjit Bawa married and also shows Jassie Gill's love angle, where his lover's father seeks a suitor with some land chunk if he has to get married to his daughter, but Jassie owns nothing. Karamjit Anmol is his partner in the marriage bureau where Ranjit Bawa comes, looking for a bride. The trio, after failing to get a bride for Ranjit, plan a plot where Jassie and Karamjit Anmol disguise as tribal women and end up in Ranjit Bawa's village, as mother (Ganga) and daughter (Radha). Ranjit's elder brothers fall for these two women (disguised) and ultimately the secret gets public when, towards the end, Jassie's lover recognises him and questions his appearance.

The story of the film is weak because not much of a connection is shown between characters to have committed such extreme goof ups, be it for love or otherwise. The men have been shown to be completely characterless (falling for their brother's wife isn't the best way to show this relationship)

The film ends up as a decent stress-buster due to its combination of slapstick and situational comedy. More than the script, it is the actors who go that extra mile in this matter, led of course by Karamjit Anmol and Jassie Gill. Their women self is hilarious yet they, at one point in the film, make themselves so believable that one gets convinced that these two are women.

Jaswinder Bhalla and Gurpreet Ghuggi's skilled comic timing add a hilarious touch to the storyline and Anita Devgn's character also has punches at the right moments.

Just one thing, Naresh Kathooria's character wasn't really required in the film. Payal Rajput also didn't have much to do.

Ksshitij Chaudhary's direction has made the entire canvass of the film realistic and unique, not many have been able to achieve such a thing in comedy films.

The art direction and props including costumes, bring out a colourfull viewing experience for the audiences and the songs made us tap feet.

Overall: Mr And Mrs.420 Returns is one hell of a comedy ride that'll make you laugh till your tummy hurts. This one's a must watch but yeah, only if your children don't understand the double meaning comedy punches (parontha, etc)