After creating quite a buzz amongst the film lovers, Bhaag Milkha Bhaag has now inspired a food stall that has been named 'Khaa Milkha Khaa'.

Farhan Akhtar, the lead actor of Bhaag Milkha Bhaag, shared a picture on his social media from this stall and even called it a smart idea. 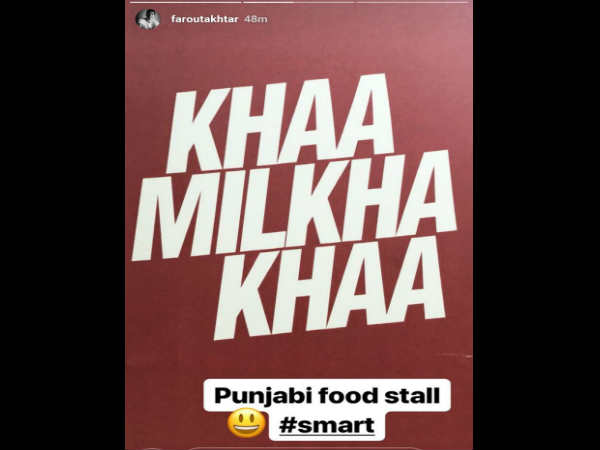 Farhan's 2013 release Bhaag Milkha Bhaag proved to be a pioneer for the upcoming sports biopics and the excitement that this film built in it's fans seems to be still the same till date, though it's been 5 years already!

'Bhaag Milkha Bhaag' starring Farhan Akhtar had the actor effortlessly portray the legendary Indian track and field sprinter Milkha Singh. Farhan Akhtar did all that he could to get into the skin on his character. He left no stone unturned to look, feel and portray his character's genuine self onscreen. His fitness levels ever since have been an inspiration for many.

The sports biopic showed the journey of a Military officer preparing to be a Gold medal winning Sprinter. 'Bhaag Milkha Bhaag', with its focus on the tiniest of details for characters, sets and more, has turned out to be a benchmark for sports biopics in years to come. There's no doubt that this food stall was also one of those many who took inpiration from this film and yeah 'Khaa Milkha Khaa' is definitely a smart idea.

Besides, Farhan's spectacular performance that has etched it's place in our minds, this film swept away all the award functions that year winning major awards in almost all categories. Amongst winning the National Award for the Best Film, Farhan Akhtar also won many Best Actor awards for the film.

Currently, sources reveal that Farhan has halted everything else to finish the script of his next titled 'Don 3'. His last was Lucknow Central starring Punjabi actor Gippy Grewal but this film couldn't do wonders at the box office. He is now in discussions with Shahrukh for finalising the leadin lady of this film and as of now Priyanka Chopra and Deepika Padukone are the names in consideration. Nothing finalised as of now though!

Watch out this space for more interesting updates.