After Modern Love, Wamiqa Gabbi Announces Her Next Bollywood Project

Popular actress Wamiqa Gabbi has been riding on success these days with back-to-back Bollywood projects in her kitty.

After ‘Modern Love’ received immense appreciation from the audience, the actress has bagged her another Bollywood project which is titled, ‘Setu-The Film’. Directed by Vishal Chaturvedi, this one will be produced by Shailesh R Singh to be produced by Polaroid Media and Wall Craft Media. The film will be made under the banner of Karma Media and Entertainment in association with Almighty Motion Picture. Also Read : Kangana Ranaut, Diljit Dosanjh And Other B-Town Celebs Also Condole Sidhu Moosewala’s Death

The update was shared by the producer on his social media in a very creative manner. The post shows a paper which looks like a summon.

The same was being reshared by Wamiqa on her social media with a caption, “Did you just summon me?”. In response to which, Shailesh has also replied, “Han ji, please haazir ho jaiyega” Also Read : Mankirt Aulakh Receives Death Threats From Vicky Gounder Group 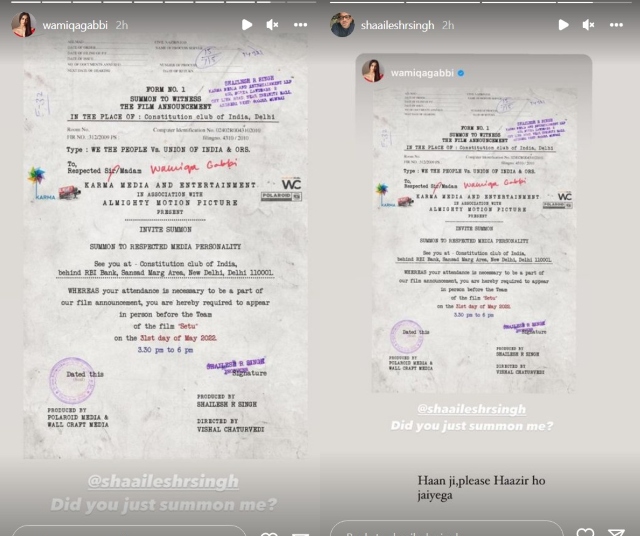 Just the basic details related to the film are being shared but what makers will bring new in this one be revealed in the times to come.