It seems our Punjabi artists are in no mood to relax anytime soon. Just a couple of days after his recent release opposite Neeru Bajwa, Gurnam Bhullar can be seen gearing up for his next project which is titled, ‘Khadari’. The movie will be directed by Manav Shah who has earlier helmed projects like ‘Ardab Mutiyaran’, ‘Sikander 2’ and others.

This one is supposedly written by Dheeraj Rattan. Interestingly, Kartar Cheema is also a part of the film while Prabh Grewal will be seen as the female lead who has earlier featured in movies including Haterz, Kake Da Vyaah and many more. Also Read : Gur Nalo Ishq Mitha: After Kokka, Neeru Bajwa Announces Her Next!

The director shared the photograph of the clap board from its mahurat shoot along with a caption, “Jai jai shree radhe shyam #newmovie#KHADARI”

Not only this, other team members also shared the photograph on their respective social media handle. Also Read : What’s Brewing Between Shehnaaz Gill And Director Manav Shah? 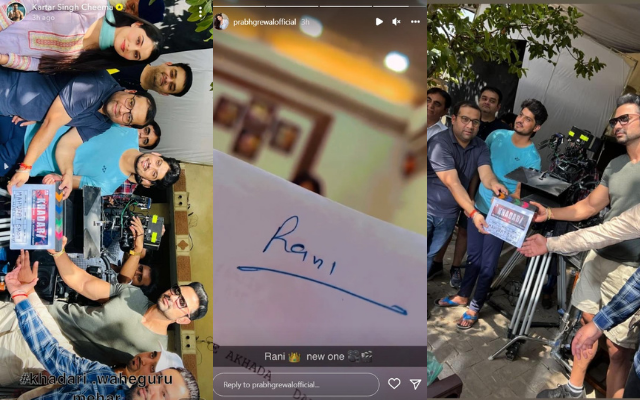 Well, the title suggests this one to be a sports drama revolving around the life of a sportsman but what makers have in wraps for its audience will come to light only in the times to come. Also Read : Ammy Virk And Director Simerjit Singh Join Hands For ‘Oye Makhna’

With brilliant actors teaming up for this one we can surely expect something good! What do you think about this film? Feel free to share your views with us in the comments section.