Bollywood filmmaker Karan Johar shares a great bond with Diljit Dosanjh as a result of which we’ve seen them teaming up for several projects including ‘Udta Punjab’ and ‘Good Newwz’. Not to forget, the super hilarious episode of Koffee with Karan where Diljit and Badshah had appeared as guests.

Well, despite this profound connection, what if we tell you that there is something about the ‘High End’ singer which makes Karan feel the heat. Sounds unbelievable? But that’s true! Also Read : Jimmy Sheirgill Regrets Losing Role In This Superhit Film 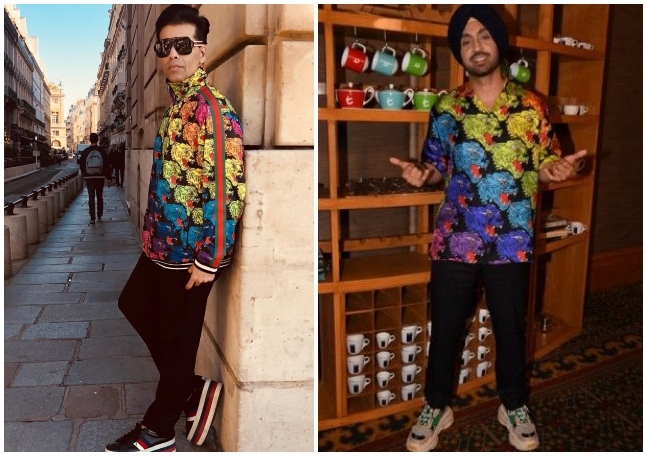 We all know how hardcore fashion freaks these two really are. Be it any public appearance, show or any airport look, their fashion game is on point. However, still it is surprising to see Karan feeling a bit challenged by Diljit when it comes to choosing outfits. Also Read : That’s How Maninder Buttar’s ‘Sakhiyaan’ Got Placed In ‘BellBottom’

Actually, in an interview Karan talking about his shopping habits had revealed about being troubled by Diljit. “I’m also an online shopper, so I go through this process of buying these things and wearing them on an occasion. But Diljit buys and wears it immediately and puts up an image.”, he had said.

Furthermore, recalling one of the incidents, Karan had shared that he had a faux fur jacket which he was saving for his big photo opportunity when he was travelling to Europe and suddenly the night before he took the flight, he saw the image uploaded by Diljit. It was then Karan called his stylist stating that he was shattered, broken and went into a ‘Channa Mereya’ mode because he wanted to wear that jacket. Well, this is what he calls his First World Problems! Also Read : When Will Pavan Malhotra Get His Acting Due?

Well, it is a hilarious story which is sure to bring smile on your face. Isn’t it relatable?