Writer- director Jagdeep Sidhu has been riding high on success after enjoying smashing great figures at the box office for his last film, ‘Lekh’ which starred Gurnam Bhullar and Tania in the lead roles. The movie was directed by Manvir Brar.

Now once again, the ace filmmaker seems to be ready with another surprise for the audience. Actually, recently Jagdeep took to his social media handle where he shared the photograph of a cotton plant alongwith the caption, “??... baat bujho”. Also Read : That’s How Maninder Buttar’s ‘Sakhiyaan’ Got Placed In ‘BellBottom’

Well, as soon as the post was shared comments section were flooded with so many responses from the fans and followers which speculated this as the announcement of the sequel of 2020 released, ‘Sufna’ featuring Ammy Virk and Tania in the lead roles. Also Read: Upcoming Punjabi Movies – 2022! 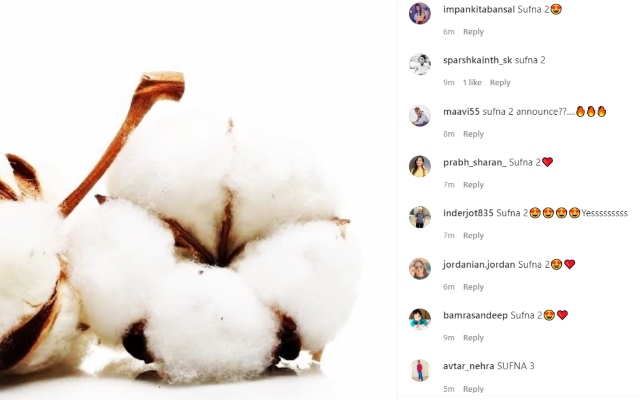 Ofcourse, how can we forget ‘narma chugna’ from the movie? Not much has been revelaed as of now but this post was enough to arouse curiosity and keep fans intrigued for this much awaited sequel. After this post, even we can't keep calm and with some really high hopes, looking forward to hear more updates from the team about this one! Also Read : Bhindder Burj Turns Singer!

On the work front, apart from this, Jagdeep’s ‘Moh’ and ‘Sher Bagga’ are awaited for their release.

Well, how excited are you for the release of ‘Sufna 2’, don’t forget to share with us in the comments section!