Tarsame Singh Saini popularly known as Taz Stereo Nation is a renowned singer of the Punjabi industry. The British singer, composer and actor of Indian descent, is the lead singer of the pop band Stereo Nation which was formed in 1996. He is credited with being the pioneer of cross-cultural Asian fusion music.

Unfortunately, some time back the 54-year-old had slipped into a coma due to liver failure. The singer was critical and fighting for his life at the hospital. Also Read: “Ki Banu Punia Da” OTT Series Review

The news was shared by Alveen Shapribhan (Hunterz) and his close friend Priyanka Timmins on their respective social media handles. Timmins' post read, “I would kindly like to request all my friends to say a little prayer for my close friend and legendary artist Taz Singh #TazStereoNation who is currently fighting for his life he is in a coma on life support (ICU). and needs all your prayers at this moment of time.” 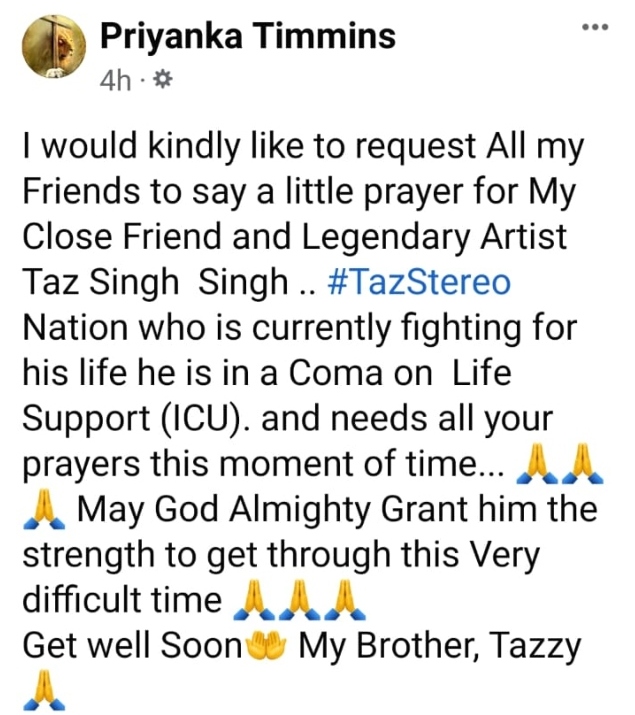 After hearing the news many people from the music fraternity had posted and prayed for his well-being. One of which was musical artist Roach Killa, who posted a picture of Taz along with the caption, “Sending Prayers and Strength to my bro @tazstereonation .. to make a full recovery ... we need more hits bro. Stay with us.” Also Read: The Netflix Series ‘Yeh Kaali Kaali Ankhein’s Anchal Singh Has Worked In Pollywood Too?

In the comments, we could also see Jaz Dhami, Zack Knight and others offering their prayers.

Recently in an update, Taz’s team (Stereonation) has updated the public through his Instagram. They said that, “Dear All

Taz Sir is no longer in a coma, He's showing improvements every day.

The family has thanked everyone for their support and prayers during this difficult time.

When there is more positive news, The family will let us all know.

Thanks again for your positive thoughts

To give you a little background, Taz first hit the charts in 1989 with the album ‘Hit the Deck’ which spent over 36 weeks on the UK Asian pop chart at number one. His most successful album to date is Slave II Fusion, released in 2000, which includes many of his most well-known hit songs including "Pyar Ho Gaya", "Nachenge Saari Raat", and "Gallan Gorian". His music videos also feature actors before they became famous. Also Read: Did You Know That Emraan Hashmi Has Been A Part Of Two Punjabi Songs?

Team GhaintPunjab too wishes the talent a speedy recovery!

shehnaaz gill could be perfect date...