Bohemia Opens Up About His Health, Reveals “Suffering From Multiple Physical Issues”

Popular Rapper Roger David aka Bohemia recently shared a story on his social media where he opened up about his health issues. The story and update left all his fans shocked and surprised.

Actually, in a post shared on his social media handle, Bohemia stated that it’s time that he stops hiding his health issues. He stated that he’s been suffering from multiple physical issues and that pain has been a part of his life for so many years now. He went on to state that owing to these health issues his work has now been slowed down. It is only the love of his fans which is his “ONLY LIFELINE”. Also Read : Movies Updates: Here’s A List Of All The Punjabi Movies Releasing In October - 2021

He has even requested his fans to remember him in their prayers and by god’s grace he will bring new music soon. Have a look! Also Read : Gurdas Maan Granted Interim Anticipatory Bail From High Court 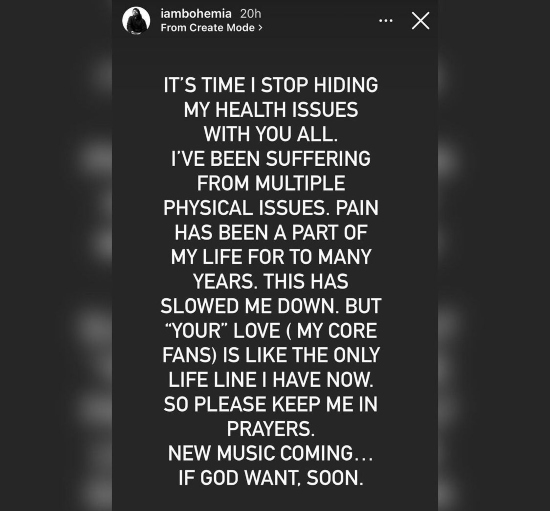 But let’s just hope Bohemia recovers super soon. Team GhaintPunjab wishes the best of health and happiness to him and wish that he brings back the magic of his raps in songs as he recovers soon because not just all the ‘Bohemians’ but even we are missing his music! Aren’t you?