Punjabi actor Jagjeet Sandhu must be over the moon as he is all set to feature in Disney plus hotstar’s next web-series titled ‘Escaype Live’alongside Mirzapur fame Shweta Tripathi, South star Siddharth Suryanarayan who has also featured in films like Rang De Basanti and Chashme Baddoor, Javed Jaffrey and many more. The show will be produced under the banner of Siddharth Kumar Tewary’s One Life Studios under the co-direction of Siddharth and Abhishek Sengupta.

The actor had shared update about the project last year with his fans and followerson social media. Also Read : Jagjeet Sandhu Bags Another Bollywood Film?

Now, as per latest updates, the project is in its post-production as Jagjeet is in Mumbai for the dubbing part. Once again, he took to social media handle where he can be seen posing alongside television producer and director, Siddharth Kumar Tewary. Also Read : JS Cheema Reveals The New Release Date Of Refurbished ‘Chann Pardesi’– Exclusive Deets Inside! 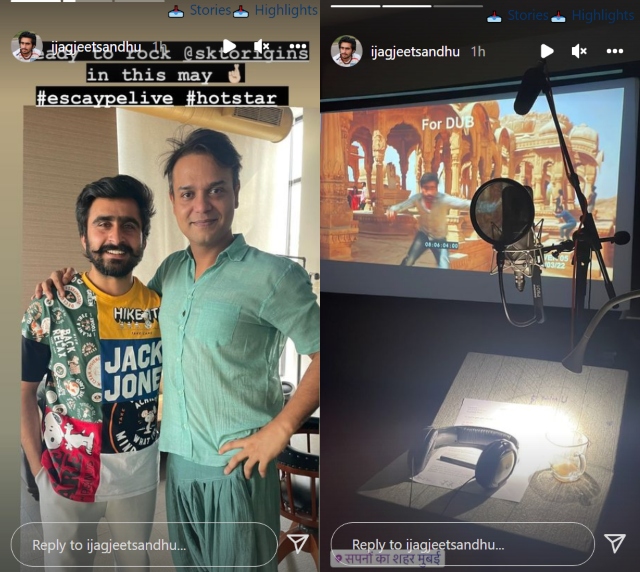 Let us tell you, the web show will be a tech-thriller revolving around the lives of five regular Indians who try to use a popular live streaming application to get an overnight fame and fortune. However, not much details about the release date has been shared as of now but surely our Punjabi audience will be equally excited to see this Punjabi lad working with such wonderful artists. Also Read : Wow! Guru Randhawa To Mark His Acting Debut With A Bollywood Movie- Details Inside!

Let us remind you, ‘Sajjan Singh Rangroot’ actor was earlier also seen in Amazon Prime Video’s ‘Pataal Lok’ which brought him immense appreciation for his acting skills. Now, once again as we know Jagjeet to be an amazing actor with all high hopes looking forward to the release of this web show as well!