Jagjeet Sandhu Interview: "I See Myself In A Hollywood Film"

Hailing from a small district of Punjab Himmatgarh, this man has big dreams to achieve. Theater actor Jagjeet Sandhu has been giving us glimpses of his talent by the character roles that he has been doing in the industry. The man has done handful of films but he has surely left a mark with each role that he has done. He is a theater actor and his skills are polished. He made his debut with Rupinder Gandhi in 2015 and since then he has been a part of serious cinema. May it be Qissa Punjab, Sajjan Singh Rangroot or the recently released Dakuaan Da Munda, Jagjeet has managed to gather a fanbase of his own.

Being in an industry where singers sign one movie after another, the actors are still struggling hard to find makers who would invest in them.

We thought of asking Jagjeet about the scenario. In an exclusive chit chat session we interacted with the actor and asked him about his struggles, hypocrisy in the industry and much more.

Here are a few excerpts from the interaction :

In Punjabi films we often see that non actors get the lead role and theater artists have been limited to just character roles. What is your take on this aspect of the industry?

I strongly believe that the term 'Hero' is mythical. Anyone can be cast as the lead in a movie but he is not the hero for sure.  According to me, the hero of a movie is the person whom the audience remembers as they walk out of the theater. Mostly the hero is not a person but the content of a movie. Talking about being cast as character actor in movies, I would say that I am proud to be one. No Punjabi movie has ever been made without strong character artists. There are movies in which as many as 5- 6 character artists are cast and the movie works  purely on their talent. In this industry, everyone knows that the lead can’t handle the movie all by himself. Hence, makers are smart enough to cast good theater artists in significant character roles to make the movie a hit. Character artists add substance and value to the movies and I am proud I can be of some good value.

The singer- actors have been getting exorbitant  amounts to play the lead roles whereas the character artiste are paid peanuts. Have you been facing the same? Tell us about your pay scale in theatre industry too.

I have had my own struggle for money and work  in the initial days but I have been clear on both the fronts. I don’t compromise on roles or money just in the lure of getting a movie. But today, the monetary aspect is pretty great. I think the money part is good because of the teams that I have chosen to work with. These teams know the value of a character artiste so I'm paid well. Also, the theater team I work with, i.e Neelam Maan Singh’s Theatre group, is a highly reputed team to work with. We travel by air to any where we have to perform and the amenities provided to us are also the best anyone can get. Also, the pay scale of this group's artists is comparatively higher than other theatre groups.

How far do you see yourself in the next five years?

My aim is high and I wish I obtain it. I find myself in a very secure place in the coming years. With each passing year, we all have learnt that content is the undisputed king of the industry. By the roles I have done and the ones that I am doing, I see myself going places. I see myself in a Hollywood movie in the forth coming years.

The digital industry like Netflix, Hotstar and many other have opened avenues for good actors. Would you be interested in being a part of them or are you happy and secure with Punjabi films?

The digital industry has surely given new avenues to actors like us. There is so much content afloat in the market now. The audience is more attracted to these digital platforms for the unique content that these platforms have been serving the audiences. If I am offered any  good work, I would be happy to be apart of a digital series. For me work matters. I might go places with these digital platforms but I am surely not leaving my roots of Punjabi cinema and theatre.

What kind of cinema are you fascinated with? What do you love playing and watching on screen?

I am fascinated with cinema in many foreign languages. I love European and Iranian cinema. The genre that I love playing and watching is realism for sure. I love watching realistic cinema and playing such characters on screen.

What is the worst kind of hypocrisy you have seen in Punjabi film industry?

I find that the makers here aren’t creative. They are more of businessmen who want to mint money. Makers are hardly interested in concepts  and content. They want to make what is already being made and has been working on the box office. They promise a lot but deliver less to the audience.

Dakuaan Da Munda, your recent project has been a massive hit amongst the audience as well as the critics. Do you think it will bring the much needed change in the industry?

Indeed it will. Dakuaan Da Munda was a completely new move in the industry. There was no famous singer actor in the movie or peppy dance numbers. The movie worked purely because of content and good acting. I think that the makers would realize that content is the ultimate king and surely they would now experiment with good scripts. The confidence of makers who have been trying new subjects has also boosted up. Hence, we will have more such movies coming to us.

Well, such an honest and plain-spoken interview shows us that this actor is surely going places. He's already bagged a film 'Sarabha' as lead and soon, as he said, we might see him shining bright on a Hollywood film's poster. 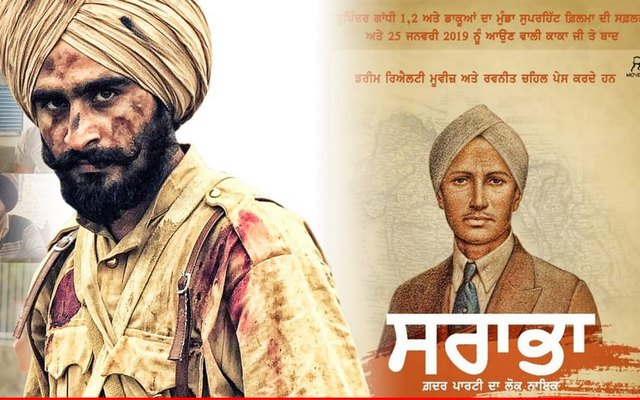